skip to main | skip to sidebar

the government AND the people

"One World. One Dream. One China," as the slogan now goes. Given the rampant xenophobia coursing through China these days, how exactly are the Chinese going to manage to "welcome" all the foreigners who will be descending on their country for the Olympic Games? 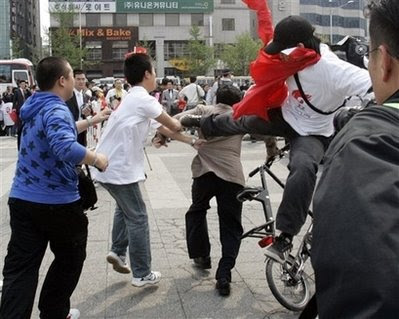 Chinese students attack a South Korean man, in a brown jacket, who was protesting against Chinese government policy for Tibet and North Korean defectors, near the Olympic Park in Seoul. (AP Photo/ Lee Jin-man, courtesy of Phayul)
Posted by kate hunter at 6:57 PM

I imagine the reaction of the general populace to the tourist influx will be pretty heavily dictated, and enforced quietly and well. The whole plastic/commercial nature of the Olympics will serve as... not so much a cover as a dilution. Hannah Arendt's Banality of Evil played out again.